Cold weather, especially extreme cold weather, causes havoc with your diesel engine ignition system. There’s a myth that diesel doesn’t burn, diesel does burn – one of the major differences between diesel and petrol is the way the two fuels burn. Petrol vaporises much faster than diesel, this causes the explosive effect when it is ignited. Diesel burns much more slowly as it doesn’t combust as easily as petrol.

So. Your diesel car won’t start on cold days, you know the battery is good, and once it’s started and been run you have no problem starting it again.

This is down to the key difference in the way the ignition system works. Diesel engines do not have spark plugs to ignite the fuel. The fuel in a diesel engine is ignited by compression of the air in the cylinder.

As the gas (oxygen etc) is compressed its temperature increases, then diesel is injected into the chamber, which then ignites. As you can imagine, on a cold day, this process is hampered by lower temperatures inside the engine block.

So what do glow plugs do?

This is where your glow plugs come in. When you start a diesel car, especially on a cold day, the first part of the ignition process is to allow the glow plugs to heat up the cylinders. That’s the light that comes on and goes off after a few seconds. The glow plug is a pencil-shaped probe, which heats to the point of visibly glowing, hence the name. This prepares the cylinder and the engine will crank start. No problem.

Unfortunately, glow plugs don’t last forever, and you won’t know you need to change them until your car doesn’t start on that first cold morning. Without that heat, a spluttering smoky start, after plenty of cranking ensues. 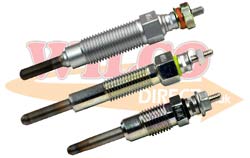 Top Tip – on really cold days, allow your glow plugs to heat through a couple of times before attempting to start your engine.

To save ruining both your battery and starter motor it’s important to change glow plugs every couple of years.

It’s also important to give your glow plugs a chance to heat up before starting the engine. Modern vehicles require only a few seconds to pre-heat prior to starting. On older vehicles, you may be able to hear the relay, which controls the glow plugs, switch off. Listen for a ‘click’ between 5-15 seconds. I’ve sat in my car listening to people cranking their cars over, and over and over – something which would most likely be solved by simply replacing glow plugs, or letting them heat through properly.